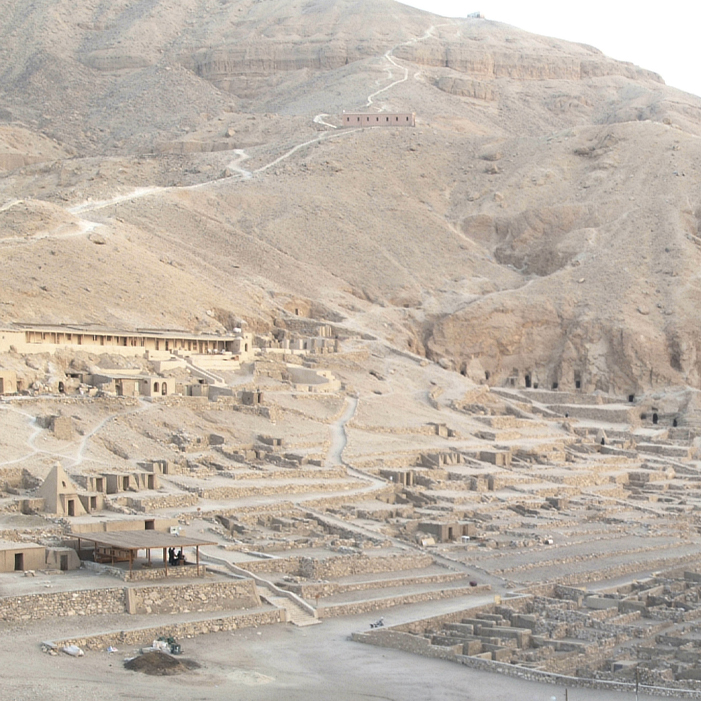 To find out more about the mission, see https://www.ifao.egnet.net/archeologie/deir-el-medina/

Deir el-Medina (Egyptian Arabic: دير المدينة‎), or Daiyr el-Madīnah, is an ancient Egyptian workmen’s village which was home to the artisans who worked on the tombs in the Valley of the Kings during the New Kingdom (ca. 1550–1080 BCE). The settlement’s ancient name was Set maat, “The Place of Truth”, and the workmen who lived there were called “Servants in the Place of Truth”. During the Christian era, the temple of Hathor was converted into a church from which the Egyptian Arabic name Deir el-Medina (“the monastery of the town”) is derived.

Since 2017, a multidisciplinary research project devoted to the renewed study of Deir el-Medina’s wooden objects has been formed as part of the Institute français d’archéologie orientale (IFAO) mission. This project is closely linked to the PÉRCÉA Bois project which began in 2018 with the aim of analysing and conserving the wooden objects from the previous excavations at Deir el-Medina, currently stored both on site and in the basement of IFAO in Cairo. Since 2020, as a continuation of the PÉRCÉA Bois project, the ÉBÉNES Programme has expanded the analysis of wooden objects through a diachronic and multidisciplinary approach. The wood assemblage at Deir el-Medina again forms one of the main corpora of material for study by the ÉBÉNES project.

Woodcraft in Deir el-Medina: a reassessment

In recent decades, the study of wooden objects from Deir el-Medina has mainly focused on coffins and funerary equipment preserved in museum collections. However, the existing range of wooden objects from Deir el-Medina is in fact much more diverse and extensive than previously recognized. Many objects from earlier excavations have been rediscovered in the storerooms at the site and in the basement of the IFAO in Cairo, opening up new opportunities to research wood craftsmanship in the village. This extensive body of largely unpublished material includes several dozen complete and fragmentary wooden objects of various dates such as furniture, statues, funerary objects, ornamental carved objects, toiletry items, crockery, walking sticks, and tools (mallets, weaving equipment, etc.), all currently being inventoried and studied

Faced with the scope of the task to study and record this material, a research team of international specialists has been assembled. The team includes four Egyptologists: Gersande Eschenbrenner Diemer (Project director, University of Alcala de Henares), Anna Giulia De Marco and Lisa Sartini (University of Pisa) and Paolo Marini (Museo Egizio of Turin); and two conservators: Jan Cutajar (UCL, London) and Marianne Rocheboeuf (Bruxelles). The team also collaborates with various other researchers, including Egyptologist Margaret Serpico (UCL, London), a specialist in the use and transport of natural products in ancient Egypt and the eastern Mediterranean, with a particular focus on resins and ritual substances used on wooden funerary furniture.